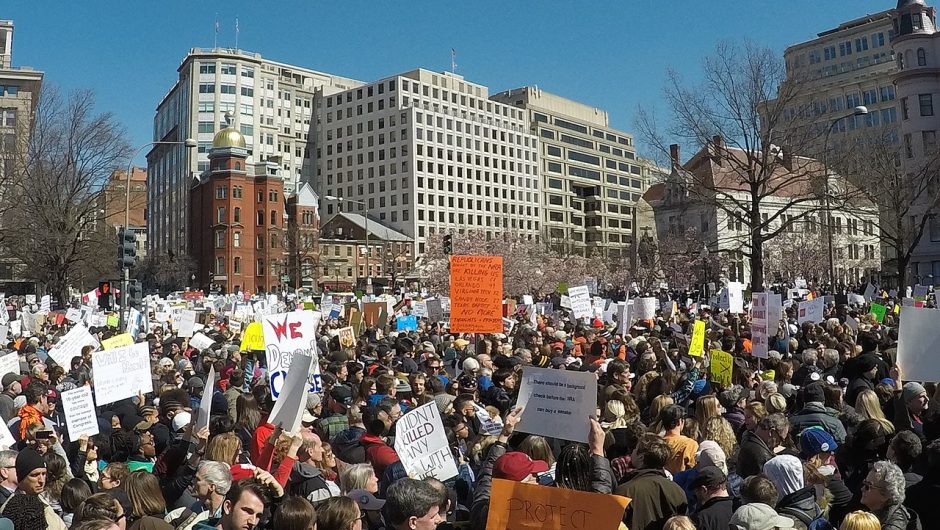 Fahrenheit 11/9 covers a lot of ground. Overall, it’s a series of galvanizing observations that only become depressing when you think about them.

Wow. Another comprehensive, fast paced, highly watchable documentary from Michael Moore. It covers so much ground, I need to watch it a second time with a pen and a pad of paper! In the meantime, here are some highlights.

On a talk show where Moore was a guest, Trump threatened non-appearance unless Moore promised to “play nice”. Moore was looking forward to putting the hard questions to Trump, but he was also trying to help his friend, the host. So, blackmailed and bullied, he agreed.

Displaying personal integrity that probably cost the nation, Moore never asked the question he had planned: Was it the Russians who gave you the money to bail you out of that hole?

Given the refusal to share tax returns, and Russia’s assistance in the election, we can pretty well guess the answer.

In the documentary, Moore makes the point that every single county in West Virginia went for Bernie Sanders over Hillary Clinton in the Democratic Party primary.

What wasn’t mentioned: West Virginia is Coal Country. That’s right. Coal miners and others in that area wanted a man who appeared to be on the verge of actually doing something to stop their unending descent into financial ruin.

In the next breath, the West Virginia delegate goes to the convention, and declares that the votes are split between Sanders and Clinton.

Split? Right next to the delegate, one person is holding a small hand-written sign that says “All 55 counties chose Bernie”.

So the first question is, How? How did the Democratic National Committee (DNC) manage to persuade the delegate to ignore the will of the people? (Actually, the documentary doesn’t say it was the DNC. It’s something we know from other sources.)

My guess is by claiming that Bernie couldn’t win, and offering additional incentives in the form of political opportunities. But it’s only a guess. The one thing that’s clear is that the delegate’s vote did not reflect the primary ballots.

The documentary then goes on as state after state declares for Clinton. But it doesn’t say if the DNC was engaged in any mischief in those states. One is left to wonder…

In any case, the more important question is Why? Why did the DNC want Clinton to get the nomination?

The answer, of course, is that the DNC has been sucking at the corporate teat for a couple of decades now. And Clinton was corporation-friendly. Bernie, just as clearly, was not.

The problem for the DNC is that without advertising dollars, they can’t win. They’re between a rock and a hard place, as described in How Hillary Lost.

Gerrymandering and Advertising (not mentioned)

The issue is not so much winning at the national level. It is much more important to win at the state level. Because state legislatures are in control of district boundaries. And control of district boundaries creates the possibility for gerrymandering. (In it’s simplest form: I put all of your voters in one district, ensuring that I control the other two. I am then guaranteed to win 2 out of 3 districts in every election.)

In state elections, of course, advertising is even more important than in national elections. Because most people never hear about a state-level candidate or ballot measure, except through advertising.

And it gets even worse.

The fact is that corporate-driven news media will not cover a candidate who does not advertise with them. So if they’re not spending money, they don’t reach people, and they don’t get press coverage. In short, unless they spend a lot of money on advertising, no one hears about them.

…and rates can double or triple during an election year!

There is one and only answer: Make advertising dollars irrelevant to elections.

How? With a social media Voting Advice System. It’s the only way.

Non-Voters are the Biggest Party

Earlier, Moore made the point that the largest party by far consists of non-voters:

Again, the question is why? After seeing the choices voters were left with in 2016, who really wanted to vote? On the one hand, you had Hillary Clinton, whose secret meetings with Wall Street made it clear she was not on the side of Main Street. On the other, you had a liar, braggart, and failed businessman who was in bed with the Russians.

After Main Street saw the nomination stolen from their preferred candidate, why on earth would they go to the polls?

The N.Y. Times and the Washington Post are good papers — damn good papers, with great journalists. Nevertheless, they are owned by giant mega-corporations. So there are some stories they just won’t tell.

The documentary points to one of them: To Be Added

Another story they won’t tell is the real reason Hillary lost — the secret meetings with Wall Street and Bernie’s loss in the primary, either one of which was sufficient to make Obama’s voters stay home.

In Michigan, according to the documentary, the Governor contrived a fake emergency and used it to remove elected mayors in 3 towns.

One of them was Flint, Michigan, where the replacement appointee decided to line his pockets and those of his cronies by building a new, unnecessary pipeline, and by replacing Flint’s clean Lake Huron water with the cesspool water from the Flint River.

Then the governor worked to hide the results of medical testing that showed unsafe levels of lead (among other things), and condemned an entire population of kids to a lifetime of lowered mental acuity, and impulse-control difficulties.

Adults died as well, from complications directly traceable to that water.

In the same way that Trump has praised Turkey’s leader for gaining sweeping new powers, and China’s leader for becoming “leader for life”, he praised Michigan’s governor for the way he managed to take charge, replacing democratically-elected office-holders with his own.

But Trump would never do that. Right?

The documentary went on to show how Trump “puts ideas out there” — first in the form of a joke, coupled with a disclaimer that “It’s something he would never do… Well, maybe… No, never! (wink and smile)”. Then, over time, the ideas are repeated, get taken up by the media, and become increasingly serious.

It Happened in Germany

Perhaps the most depressing part of the movie was cautionary tale. The parallels between America and Germany run deep, and in many ways Germany was better.

Kids May Be Our Salvation

They get the power of social media, because they have experienced it. (The documentary shows several hundred thousand who showed up for the “March for Our Lives” — a demonstration that was organized mostly on social media.)

So when I talk about a social media-based Voting Advice System, pretty clearly I should be talking to them. Because they get it.

When you can picture a network of interconnections, and can see the network effect, it’s pretty clear that the system will work, and why. But only one out of a thousand adults I’ve talked to have the capacity to visualize those effects. So my attempts to explain it to adults largely fall on deaf ears.

But kids don’t need to visual the effect of networking. They do it, because social media is ever so convenient. And they have seen its power. So they know it is real — no visualization required.

We may be in for a long, dark night. But if and when we emerge, it is most likely those young activists who will be responsible.