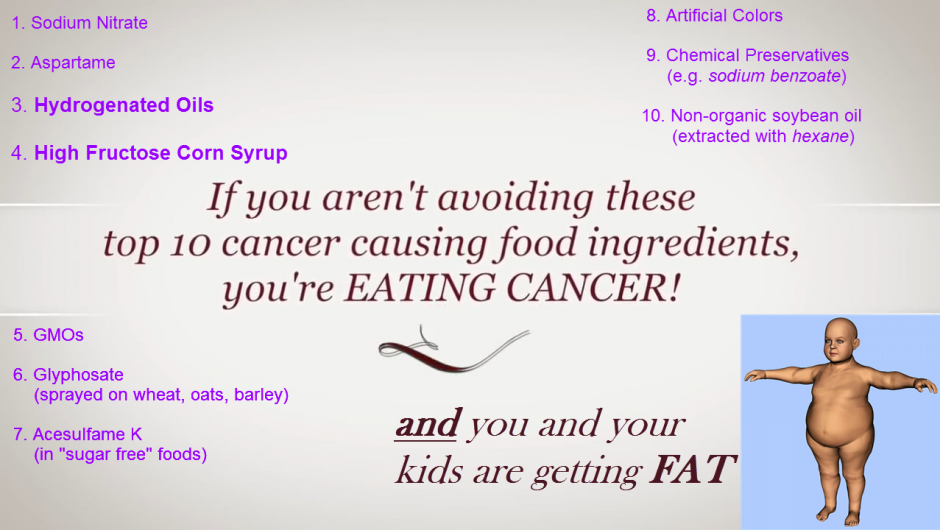 If you’re an American, you’re probably fat. And if you’re an American child, odds are overwhelming that your life will be cut short by complications rising from obesity and other complications. Despite what you may have heard, it is not your fault. It is not a matter of “personal responsibility”. There are ingredients in the American food supply that are making you fat. Those ingredients made their debut in the 1970’s. They are a matter of corporate responsibility — and culpability. To protect yourself, there’s a lot you need to know. (Original image courtesy of Natural News.)

Sure, your kids need more exercise. But why don’t they want to? For that matter, why don’t you have any energy left at the end of the day? Our parents and grandparents were a lot more active than we are today. But it’s not because we’re lazy. It’s mainly because the foods we eat are a lot less healthy.

If you work at it, you can manage to eat healthy in America. But you really have to work at it. You shouldn’t have to work that hard, but you do. There are some ingredients in the American food supply that you absolutely have to know about — ingredients you might never have heard of before. You have to read labels, and you have to know which restaurant foods contain them. Then you have to avoid them. All of them. All the time.

It’s a pain to read labels. You shouldn’t have to read them. But the fact is, the American food supply is so polluted with metabolic and intestinal poisons that you have to. The dangerous ingredients listed below aren’t part of the food supply of other civilized countries — except where American fast foods are starting to make an appearance, closely followed by the obesity, diabetes, and other diseases they cause. The quality of the food supply is especially high in those countries that have socialized medicine, where everyone pays if you get sick. But they’re legal in America because, here, public health comes a distant second after corporate profits. (And that is probably the main reason that corporations campaign so heavily against socialized medicine.)

Meanwhile, the FDA, which is supposed to be looking out for the health of the citizenry, is instead way too concerned with the health of the corporate bottom line to step up to the plate and do the things that would save millions of Americans from spending their last dollar, and the last several years of their prematurely truncated lives, on a hospital bed.

And what about our legislative representatives? Are they doing anything. Some of them try. But too many of them stand up and brag about how “America has the best health care system in the world”. Sure, we do. Because we need the best health care system in the world. But is it working? No. When it comes to disease, longevity, and infant mortality, the United States consistently ranks at the bottom of all industrialized nations. In fact, often the U.S. ranks just above a handful of 3rd world countries.

In short, virtually every nation in the world has a better record on the health than we do. The food supply is to blame. Food manufacturing corporations aren’t looking out for you. Agribusiness isn’t looking out for you. Drug companies and doctors aren’t staging sit-ins and demonstrating for a healthier diet. And government sure isn’t restricting corporate activity in this area, the way it at least tries to restrict fraud, theft, and other activities that harm society while making a profit. That leaves it up to you — and you alone — to know enough to safeguard your health and the health of your loved ones.

Do the gaint food corporations know these things? Darn right they do. The science has been published for decades. But they pay their scientists not to know. They pay their lawyers to make sure they can get away with it. They pay their lobbyists to make sure legislators stay in the dark. And they pay for advertising to tell you how good their products are, over and over again, so you’ll buy them.

And you? You pay the biggest price of all. So do your children.

What About “Personal Responsibility”?

I was in a supermarket once, talking to a lady about the contents of one of the packages on the shelves. The poor lady said to me, “I’m ashamed to say that I don’t read labels”. Huh? How could she? How would she know what to look for? I’ve been doing this since high school, and I’m still learning about stuff I need to avoid — and they’re putting in a lot more you need to avoid these days. (For example, High Fructose Corn Syrup and Partially Hydrogenated Oils only made their debut in the 70’s.)

So I said to her, as strongly as I could, “You should not be ashamed. The people who put this crap into our food supply — they are the ones who should be ashamed.”

But are they ashamed? Heck no. They have their millions and their mansions, and they’re just as proud as they can be of “living the American dream”. The fact that they destroy lives and cause families to spend every last dime on medical care in the last years of their lives makes no difference whatever to their peace of mind.

And in a blatant attempt to add guilt to injury, corporations pay people to tell you it’s a matter of “personal responsibility”. With one hand, they pay people to say, “You have to make the right choices”. With the other hand, they’re poisoning every drop of food you eat.

Here is the answer to that fallacious argument. The next time you hear one of these people say, “It’s a matter of personal responsibility”, tell them this:

Very well. I agree with you. Now, I want you to agree with me. I am going to pound your head through that wall. And I want you to state for the public record that you are personally responsibile for that. If you didn’t learn enough about martial arts to know how stop me, well, that was your choice. If you haven’t spent enough time in the gym to be fit enough to stop me, that too was your choice. I want you state here and now that you are responsible for the harm you are about to suffer, because the doctrine of personal responsibility holds that the victim is to blame for such evils, not the perpetrator.

What You Can Do

Okay. So it’s not entirely your fault. But there are still some things you can do to improve your health, your looks, and your waistline:

Clearly, there is more than one thing wrong with the American food supply. It is a sad fact that American corporations put profit above all other considerations — above morality, above truth, above your health. They don’t regulate themselves, they’re not held in check by government, and the fiction that they are regulated by “the market” is, quite simply, a lie. That problem, and the only possible solution, is described more fully in What’s Wrong with American Corporations?. It’s a problem we must solve, for the sake of our children’s health, if for no other reason.