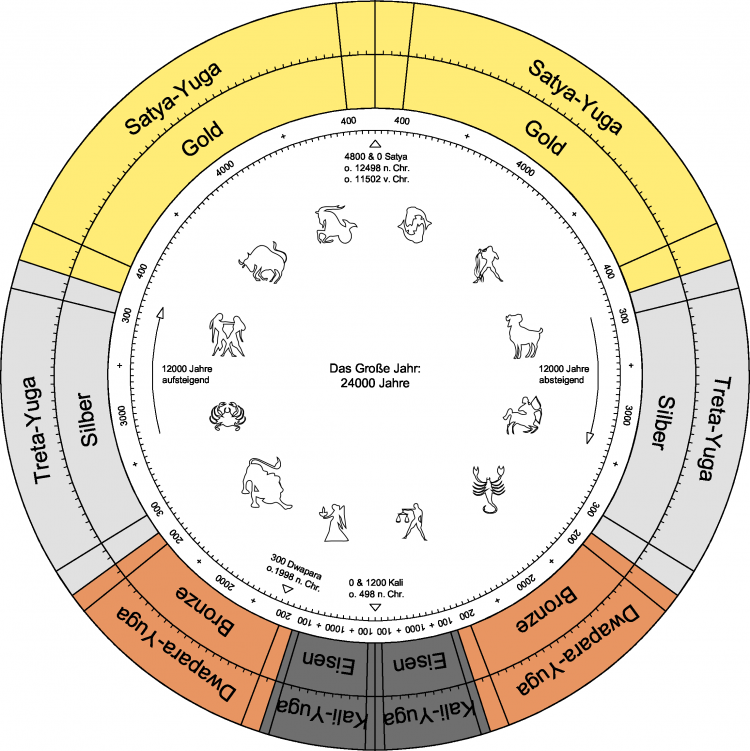 The long-cycle Yuga corresponds to the astronomical alignment of our solar system. It may even correspond to humanity’s advancements. But why?

The Earth has a “long cycle” that is in excess of 24,000 years (12 * 2160 years, actually = 25,920, or just under 26,000 years). The ancient texts from India call that period a Yuga, and observe that mankind advances during that period, reaches a peak, and that gradually deteriorates, until it reaches a low point and starts up again.

Whether humanity actually follows that progression or not, it is clear that our own dark ages represented something close to a “minimum”, and that we have been steadily advancing since then.

What is clear is that the “long cycle” matches the earth’s precession — the degree to which the “North star” changes, over time, until 25,920 years later it is pointed back at that same star.

Now then, one explanation given for the rise and fall in humanity’s advancement in a 24,000-year cycle is that the earth is closer to the galactic center at one end of the Yuga than it is at the other, because the solar system itself is a large, elliptical orbit.

The orbit of the solar system makes sense. In fact, there are quite a few solar movements to account for. But the “explanation” for mankind’s advancement during a given phase of that orbit lacks credibility — because the difference in position is infinitesimally small, on a galactic scale. So to my mind it offers no real “explanation” as to why mankind is more enlightened and advanced at that time.

ToDo: A specific sequence of videos needs to be culled from the list, to support make the case even more convincingly. In the meantime, what follows is a summary of the important points. (Excerpts from those videos, combined with these notes, would make a great talk!)

As I wrote in Could Our Dual Star be Arriving, from Raja Yoga Insights #13, a huge number of insights have been occurring to me, of late. More than normal, even for me! Of course, the Raja Yoga course has sparked most of them — but even so, my meditations have been unusually productive!

Now then, if that star system is approaching us, the overall effect might well be to lighten gravity! And if even our thoughts have gravity, maybe they fly higher as well. (That would be especially be true if we are getting nearer to a dwarf star.)

Now, “gravity” of course, is a highly suspect proposition. We have lots of mathematical models that let us predict its behavior with extreme accuracy, but zero understanding of what it really is! (Recent measurements of “gravitational waves” notwithstanding. Some debunking efforts have already begun.)

Going to YouTube University, as I have been (“YouTube U”, as I affectionately call it), I have been intrigued by models of the “electrical universe”, the behavior of plasma (the fourth state of matter, a superhot gas), and the actual of shape and behavior of electromagnetic force fields.

Now, in the Electrical Universe model, there is no such thing as “gravity”. There is simply (and only) electromagnetism, which can nicely explain everything we observe in the physical universe, from photons and electrons up to planets and galaxies — without the need for “black holes”, “dark matter”, and “dark energy”, all of which have huge theoretical problems, and which never have been (and never can be) observed.

So, yeah. I am a fan of the Electromagnetic Universe theory (which, I suspect, is a better name for it than the “Electrical Universe” theory — but either one will do).

I bring that up, because if “lesser gravity” is the explanation for things like the ability to build the pyramids and higher thought processes, there is the problem that the effects would only be good for half the day (when the external gravity was pulling away from the earth). But things would much heavier the other half of the day — perhaps even crushingly so, which would not be good for progress. But clearly, we are progressing, moving from the dark ages toward a more enlightened state, so the gravity model makes a lot less sense that some sort of electromagnetic influence.

As an explanation of precession, too, the dual-star theory works nicely — because the speed of precession has not been constant! Instead, it has been speeding up. That makes sense if we’re approaching a distant star. It makes a lot less sense if it’s some sort of wobble in the earth, or some sort of rotation of the solar system. (Something I would never have known, were it not for YouTube U!)

Now then, if we are beginning to approach a companion star, and if there is an electromagnetic effect, it would make sense that the effect would not be dependent on where the Earth happened to be in its daily rotational cycle. And if that effect has the appearance of “lightening gravity” in some way that has yet to be explained, then it could well help to explain how the pyramids got to be built, and why are thoughts are flying higher!

Note:
One thing the electromagnetic theory does noteasily explain is the equivalent attraction of a large mass and a small mass (for example, a tennis ball and a bowling ball). It would make sense that a larger mass has a stronger magnetic field, so the rate of attraction should be greater for the larger mass. One possible answer is that the difference between a tennis ball and a bowling ball is negligible, compared to the mass of the earth. So it may be that early experiments simply were not precise enough to measure the difference. But if the electromagnetic theory holds, there should be some difference, however slight.

Implications of a Companion Star

If a companion star is headed our way, then it could produce the kind of tidal displacements that led to global floods, and the kind of meteor activity that led to the “serpent in the sky” legends of the Aztecs.

It could also have created a kind of magnetic “intensity” that assisted in the building of the pyramids—structures which were possible built for the express purpose of either harnessing that energy, or shielding ourselves from it, or simply to tell future generations that it was coming.

Note, too, that in addition to pyramids, there are man-made cave systems all around the world, as well — huge systems, capable of housing an entire village. One suspects that they were created to protect mankind from large meteor events – and, given that it might have been necessary to reside there for two or three years, it would have taken a fair amount of advanced technology to do so.

Because the reality, more than slow and gradual circle, may be more like a continually ascending ramp, punctuated by a sharp valley when the downside of the stellar conjunction arrives.

In other words, the magnetic interactions may have us continually growing and expanding as individuals and as a civilization, only to see us hammered back into the earth when the meteor showers and gravitational tides impact us.

At that point, with civilization in taters, the capacity to maintain things disappears. Eventually, the technological remnants disappear, too. At that point, all that is the left are the stories that are handed down from one generation to the next.

That process, in all likelihood, explains the “myths” that are prevalent in our society. Because the fact is that ancient civilizations had no idea what “fiction” was. They would tell a tell, and it would expand in the telling, but it was always based on reality. So when India legends talk about “flying machines”, I take them at their word. I believe them.

It doesn’t take long, either. Imagine trying to describe a television to a child who has never seen one. Or an airplane. Or the internet. Or a microwave, or any of thousands of things that are now commonplace. Now imagine that story passed on to their children.

It’s not hard to see those stories evolving. But they were always founded on truth.

We have to see the “flood legend” and other “primitive” myths the same way—as the harbinger of a fate that has fallen to us in the past, and that will do so again in the future.