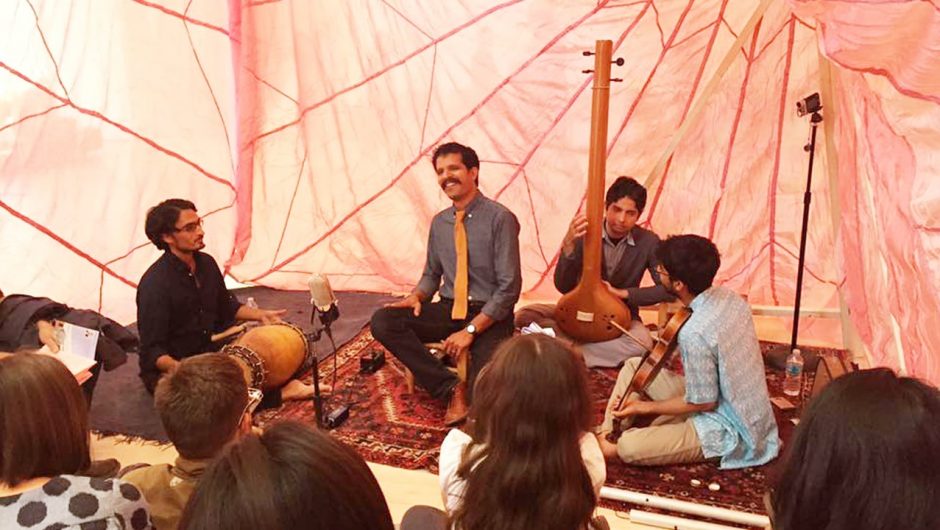 Spirituality and Music are two things that go together — exceedingly well. It’s a tradition that needs to become even more prevalent!

These thoughts are nowhere near complete. But they are intriguing. They came to me while meditating during the 2017 Xmas Concert at the Ananda center. (The picture above was not taken from the concert. It just does a great job of representing spirituality and music. The concert was performed by a 40-member choir which looked remarkably similar to this 2015 ensemble, with a few solos and pieces by smaller ensembles sprinkled in, plus an electric piano and, at various times, a flute, a horn, or a small drum.)

I almost skipped the concert, as I was feeling tired. But that would have been a big mistake! The meditations and insights that occurred as the music was going on were as spectacular as the music itself. (In addition to this essay, it also led to Is the Medulla the Home of Ego?, and the idea that perhaps the chakra energy-centers represent a 5th dimension portal into the human framework.)

The concert was filled with acapella renditions of terrific classical music, and it was “uplifting” in the extreme — in that, like much great classical music, it caused me to lift my head, tilt it back, and inwardly gaze upward at the divine!

Note:
I first observed that effect when I was introduced to particularly great classical music as a teenager. I can’t say I’ve liked all of it, but the pieces I have liked have been similarly (and literally) “uplifting”.

Apparently, too, about 1/3 of the music was written by Kriyananda. That was made especially noteworthy by the fact that the pieces that were introduced as being by a classical composer weren’t always the most uplifting! And some of the pieces I recognized as traditional holiday songs.

After subtracting those two sets of compositions, that left over half that were particularly uplifting — and apparently half of those were written by Kriyananda. (Fascinating.)

A Short History of Spirituality in Music

It is worth noting that Carnatic music in India is all about spirituality. It is nothing less than a form of “spiritual jazz”, in which skilled musicians improvise on a theme, for the duration of the concert.

An Arabic music session has much the same flavor, as Arabic musicians take turns improvising on the theme, using a defined scale and rhythmic structure, but with everything else left up to the musician!

In the Indian and Arabic traditions, then, the stated goal of musical training is to “make musicians”. In the West, on the other hand, the tradition has been more about training artists to “make music”, where the music was written by others.

But there is nothing to say that the music they play is short on spiritual qualities. Far from it! Especially in the early days of Western classical music, it was the stated goal of the composer (and the churches who employed them) to produce spiritually uplifting music!

One way they did that was by using perfect 5ths in the music, as well as 3rds. Other intervals in the musical scale were used more sparingly, and more as passing tones.

But music composition, like all other crafts of the time, was taught using the guild system. So one person’s innovations were kept secret, passed on only to other members of the guild — in this case, the composer’s best students.

For that reason, it may be that some of the principles they used have been lost! Although the ideas expressed here are far from complete, it is possible that they point the way to recovering at least some of those secrets.

The music was rich in harmonies. Wonderful, spectacular harmonies. Now, we know that Adagio music is soothing, because it’s running at approximately the same rhythmic frequency as the Schumann Frequency generated by the Earth. (We were born in that frequency, and feel happiest when bathed in it.)

We also know that setting up the slower 8-10 beat range that is characteristic of alpha brain waves, “alert relaxation”, and meditation is induced by setting up two frequencies that are close to one another. Eight to ten beats a second is too slow for us to hear, but when we feel both vibrations at the same time, we can feel the difference-frequency as a slow pulse, called the beat frequency.

Those observations made me wonder if perhaps the perfect 5th over a tonic base note does the same thing, creating a “beat frequency” that we become aware of. (I really don’t know the answer! It’s just an interesting question to ask!)

I’ve always like music that has some instruments playing fast while others go slow bits. It creates an interesting confluence of rhythms that, to me, feels like an intertwining of melodies.

As the singers sang their parts during the concert, they were particularly adept at keeping the musical pulse going. That pulse is achieved by a slight accent on the first beat of a measure, and sometimes with a smaller pulse elsewhere in each measure.

I think the reason that different rhythms work so well (when they are keeping the same time) is that every so often they come together in phase. So if one part is doing 1-2-3-4, 1-2-3-4 (where the highlighted beats are accented) and another part is doing 1,2,3,4,5,6,7,8, then every eighth beat the two rhythms come together and are in confluence, or possibly “phase”.

(The underlying rhythms are generally in perfect phase at all times. But the parts you hear are the parts where music is written, and where the music is accented. So its what you hear that comes into phase. On the other hand, I’m sure there are some great polyrhythms out there — especially in Indian classical music — where one rhythm is in 7/8 time and another is in 5/8 time (or something to that effect), so they sync up every 35th beat!)

Most of all us hear “relative pitch”. That is, we are aware of the difference between notes, without regard to what the notes actually are. So if someone starts singing Happy Birthday, we can join right in and sing along, no matter what note it started on.

Given that fact, I’ve always wondered why some music sounds better in the Key of C or the Key of F, or whatever. Part of that might be the “even tempered scale” that we use in Western music. But also wonder whether there is some kind of harmonic resonance between the rhythm in which a piece is played and the key the music is played in (or more accurately, the frequency of the root tone, or tonic, for that key).

If such a resonance does exist, then music written in a given key might sound better to our ear if played at one tempo, rather than another. We wouldn’t be consciously aware of the difference, of course, but it could be that if the key and the rhythm don’t match, then the two never get “into phase”. And even if that phase is far beyond our ability to hear it, perhaps we are in some way aware of it.

In Phase and Out of Phase = Tense and Relax!

It is commonly understood in harmony theory that when two notes are in unison, we feel calm and relaxed, and that when the notes differ they set up a tension that is “resolved” by bringing the notes back into harmony.

In each case, it strikes me that we are perceiving none other than the musical equivalent of the Tense/Relax Technique that is so effective for activating the energy centers (aka chakras) in our bodies!

Music that affects us spiritually, then, may be achieving the same goal: Creation of tension followed by a relaxation that promotes an energy impulse!

Finally, here’s another thought I’m not totally sure about, but is worth pursuing: Music operates at multiple levels, where:

However, there are some additional aspects to take into account:

That’s what I have at the moment, at any rate. Others have undoubtedly gone into at least some areas of this subject in much greater depth. If you know of any, please send them my way!