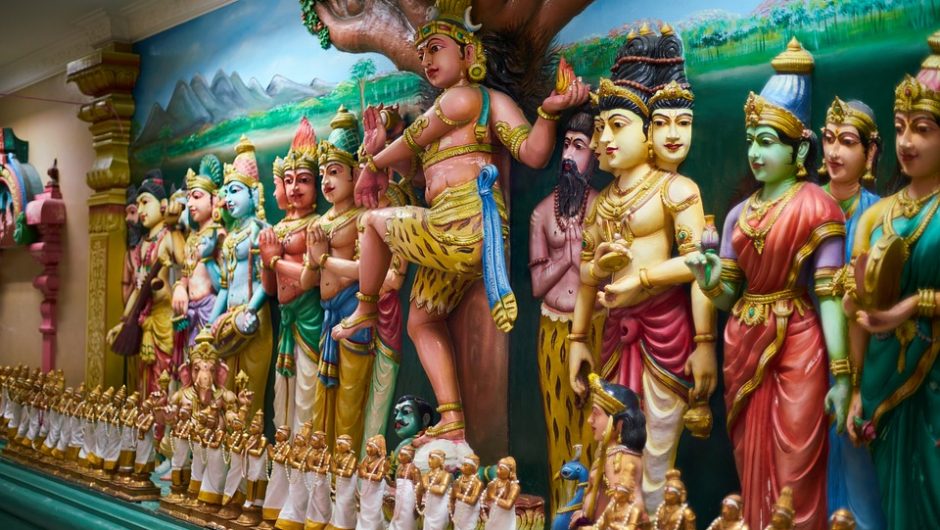 Hinduism is one of the world’s great religions, in terms of numbers. But in terms of openness, acceptance, and graciousness of spirit, I believe it is the greatest. In my eyes, at least, it is.

There are spiritually-connected people in every faith, of course. But that the same time, there are people who are somewhat lacking in the spiritual-connection department! To ferret them out, I devised “The Christianity Test”.

In a remote mountain village in China, there is a farmer who by all accounts is a really good man. He’s always been good to parents, and he takes care of them. He’s a good neighbor and a good friend. He loves his wife, his children, and his brothers and sisters, and he takes care of them whenever his help his needed.
The only thing is, that village is so far away, and so remote, he has never even heard of Jesus. So my question is this: Is he going to heaven? Or is he going to hell?

The true Christian will always tell you: “He’s going to hell.” And my response to that is that wherever you guys are going, I’ll take the alternative.  Whatever it is!

In fact, I suspect that they have their names mixed up. To spend eternity with such bigoted, intolerant people — that would be hell!

Most of the major religions seem to have a similar outlook: “Our way is right. Everyone else is wrong.” But Hinduism is different. For that very reason, I regard it as the most “spiritual” of all religious practices.

To most people of good heart, each faith is like a path up a mountain. Each starts in a different place, and each takes a different route, but they all meet at the heart. In fact, a truly spiritual person of any faith relates well to a spiritually conscious person of any other faith.

Hinduism takes that a step further. A Hindu knows that God is vast, and we humans are tiny. When we are enlightened, we connect with the Life Force Energy of the Universe (or God), and are one with it. At such times, we are huge. But our tiny minds cannot begin to comprehend the immensity of it, or even begin to put it into words.

To say that is one thing. But the people I’ve met who practice Hinduism are unique in their shared understanding of that truth. They all know that the deity they are worshipping is not “God” but rather the manifestation of God that appeals to them. For that reason, they are uniquely accepting of other forms of worship.

It’s not that they tolerate other religions, mind you. Because “tolerance” implies something dislikable that you allow to exist in your environment. It is, rather, a matter of total acceptance of other religions — a recognition that they are part and parcel of the religious experience, and that each of them can share valuable truths that help the true seeker arrive a greater comprehension of the “big picture”.

That point was brought home to me at the recent Yoga Shibir (Yoga Camp) I attended (see The Great Spiritual Question). The temple that provided the space for the camp was a Krishna temple. On the last day, the teacher gave a talk to the temple members, and I had an opportunity to participate in one of their rituals, following the talk.

In that ritual, a small candle is on a plate, and you wave the plate in small circles to “spread the light”, as it were. It was a nice enough thing to do, so I was happy to participate. But afterward, one of the folks gave me a deeper explanation.

In the old traditional temples, at the back of the temple there is a cave. There are no lights in the cave, and the sculpture of the deity resides in that cave. So when you move the candle about to see different parts of the deity!

Then it was explained to me that the sculpture could be several meters wide, in some cases. That’s 10 to 15 feet! So as you move the light about, you are seeing different parts of the sculpture, but you still aren’t seeing the whole thing. In fact, only after participating in the ceremony many times could you even begin to comprehend the whole!

Whoever thought up that ceremony back in ancient times was nothing less than a genius. Because there, you have an absolute physical reminder that we can’t see the whole picture and we don’t know the whole truth. We particularly do not know the whole truth of God. Heck, it’s hard enough to form a decent picture of the local deity! Never mind the God which is the entire universe and every tiny thing in it!

So Hindus share the world view that every religion is a piece of the pie and that it takes all of them to make something that approaches a complete picture. I love that viewpoint!

Note:
Hindus even accept intolerant religions like Christianity and the Moslem faith. Personally, I tend to draw the line at intolerance. I can accept pretty much anything else, but not that. But Hindus are, in a very real way, better followers of Jesus’ teachings than I am! Because they accept everyone. They even forgive and accept followers of intolerant religions, because they are also seeking God, in the best way they know.