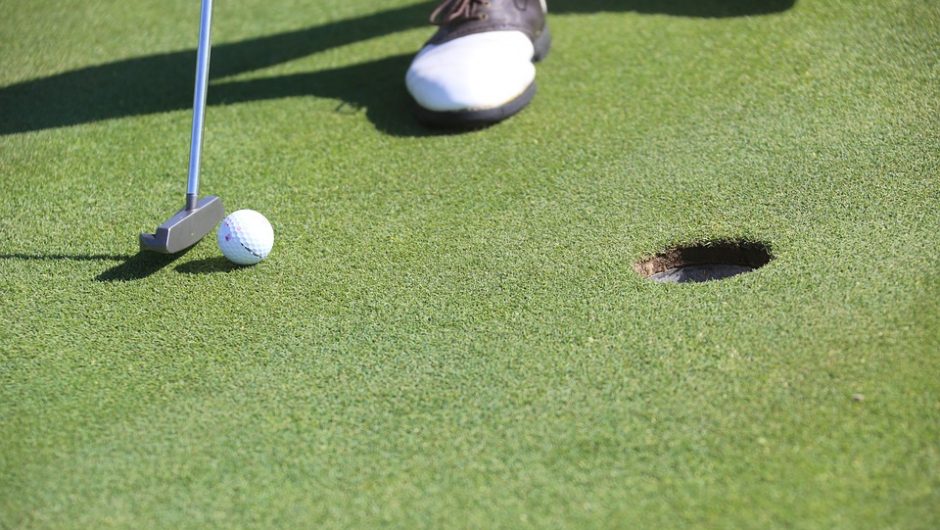 The first 6 inches of a putt are critical. Mastering those first few inches are the first step to mastering the putting game.

Everyone can master the putting game. Whether you’re a kid, or clumsy (or both), you can still master putting. It doesn’t require any athletic ability. At all.

Yet, the fact is that quite a few folks seem to struggle with that part of the game. Perhaps you are one of them. Fear not! Rescue is at hand. Let’s start by understanding the nature of the problem.

Why, then, do so many people have such a hard time with on the course? The answer, I think, lies in the nature of green speed.

You can’t see the speed of the green, the way you can see its slope. Moreover, green speed changes throughout the course of a round. So you need a feel for green speed—a feel you acquire by taking the right feedback from every putt you make, throughout the round. And that includes breaking putts, as well as straight ones!

The mechanisms for acquiring that that feedback are summarized in other posts in this series, and explained in detail in my book. But here, I want to focus on the first six inches of every putt you make.

Here’s the thing: If there are any  mistakes in your putting form—any mistakes at all—they will show up in those first few inches. Wouldn’t it be nice to know, beyond a shadow of a doubt—that your form is not the problem?

You can be sure of that very thing, by doing a very simple drill I learned from the master of the golf swing, Ed Tischler.

Here is the drill:

A hundred times, you say? Isn’t that rather a lot. Well, no. Not when you consider the benefit. You see:

Note:
If you can’t do it after several tries, then maybe your stroke does need work. Seek professional help! But most people will be able to do it, even if they have nothing but putt-putt golf!

When Ed gave me that drill, I didn’t think very much of it. I did it pretty much without thinking. Then around putt 88, I missed one. Egad. You better believe I kept my focus and concentration for the next 100!

It was only later that I realized how much I gained from that silly, simple drill. I gained the deep seated certainty that my putting form was okay. You see, there are many ways to putt. There are many styles, and many personal preferences. All of them can work.

So the style you use is pretty irrelevant. If it works for 6 inches, it’s good enough! And with that drill, you can be sure that you are good enough.

The result of every putt is determined by direction, speed, and technique— which either produces the other two as intended, or fails to do that. Doing 100 short-distance putts eliminates a third of the possible problems!

After doing that drill, never again would I question whether I missed a putt because my stroke was bad.

No. When I missed a putt, I knew that either my read was off, or my speed was off. Those were the only two remaining options. Figuring out how to tell which was off, and by how much in each case… Well, that was a process that took a lot longer. But I acquired certainty about my form in less than half an hour.

I wish that certainty for you, as well. Then you can focus your attention on the really interesting parts of the putting game: What direction to choose, and how fast to stroke it!

Farewell for now, and good putting. May you average 2 strokes per green!

Eric Armstrong is the author of Comprehensive Keys to the Green–a manual guaranteed to save you putting strokes, and help you average 2 putts per green, round after round.