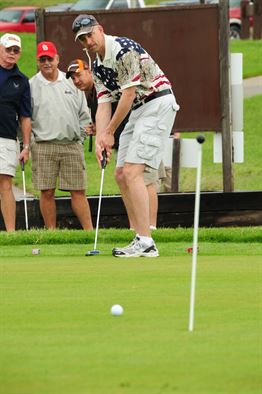 With Putting Games, you can improve your skills and have fun while you’re doing it. You can compete with yourself, or spend time on the putting green having fun with your friends. Either way, you get better, and you win!

Improving your short game is the quickest way and surest way to lower scores. For a good player, putting and shots around the green are 50% of the game. So once you’ve got a semi-decent game from tee to green, short game skills dominate the scoring equation.

These games gives you a way to spend time on the putting green having fun with friends, building skills you can use on the course — and because you’re having fun, it’s easier to spend more time on this much-needed aspect of your game.

Acknowledgements:
Many thanks to Ed Tischler of New Horizons Golf for introducing me to the concept of putting games in general, and to the mad “Seven/Eleven” and “Stymie” games, in particular. I got “Up and In Skins” from Keith Shepperson. “Bango Bongo” came from Jim Holmlund.

One game that isn’t in the list is skins. With decent putters, it’s too hard for anyone to win a hole! It’s good for Up-and-In competitions, though.

This is a two-person game. The beauty of it is that one bad hole doesn’t put you out of the competition.

This is a good multi-player game, but it’s hard to recover from a bad hole.

This game allows multiple players to play in a way that is similar to match-play competition.

Note:
In the fairway version, you play by strict honors, so the person farthest from the hole plays first — even if they’re still the farthest away after they make a stroke. (The only exception is that everyone must be on the green before anyone putts.) But when you’re playing, every stroke counts — towards your handicap, if nothing else. Here, extra strokes cost nothing, so play rotates from player to player — so a player has exactly one chance to sink when they’re away. Then it’s the next player’s turn. That way, a person can’t take multiple putts to “sneak up on the hole” when everyone else is close. (This is an exception to the rule of “strict honors”.)

The more players there are, the better this game is.

Up and In Games

If the venue allows it, these are terrific skill-builders that lower scores:

When I started doing a lot of putting, I noticed that my back hurt. That’s a pretty common complaint. Ed Tischler gave me the solution for that. (It’s something I should have known, too, given that I teach people how to protect their backs!)

The trick is to push your butt out, so it isn’t bent. That simple moves makes you bend at the hips, instead of the waist, which bends your back.
The difference is pretty amazing. There is no strain at all when the back is flat.

Note:
Don’t push it so far back that it’s arched! That works when you’re putting, but it interferes with the full swing.

I learned how to deadlift from a book on kinesiology by Dr. Michael Yessis. That book taught me how to lift properly. (You keep your lower back flat, but the feeling is that your upper back is arched.) I like to say that, when you do that, you safely try to lift a piano — It may not move, but you won’t kill yourself trying. (However, do NOT try to do that just because you read about it here. Get someone who knows to check your technique. Reading about it is one thing. Doing it correctly is another.)

So do your best imitation of an ape, and you have the perfect back position for lifting. And you’ll find that it’s helpful for the full swing, as well.

IMPORTANT:
Let me say it again… Pushing your butt out to the point your back is arched does help to prevent back strain during putting and chipping practice, but it is not helpful when you are making a full swing. In fact, it has the opposite effect. The way to prevent back strain during the swing is to keep your back flat, so it is midway between a forward bend and an arch. That position allows for a freer turn, and prevents stress on your lower back caused by the swing — something I learned from Pete Dooley, at GolfTEC.