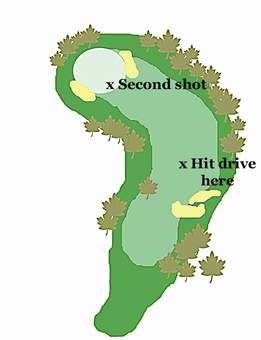 Professionals play for par. But that’s hard. A simple scoring trick can make it easier to keep score and make things a lot more fun. But who wants to play for bogey? There’s no way it sounds good. Well, “par” + “bogey” = “barby”. And everyone wants to play for barbies!

Professionals play for par. They work 8-10 hours a day, 5 or 6 days a week. A hundred years ago, the standard was bogey. It had the same connotation that “par” does today: It was the ideal score to achieve on any given hole. That’s a reasonable goal for any reasonably assiduous weekend golfer to achieve, with today’s technology. The only thing left is to make it sound desirable.

Note:
I never play for “Barbie”. That’s a trademark of the Mattel Corporation, and I would never, ever, want to infringe on their turf, of misuse their trademark. Never, ever. Not in a thousand years. So I never play for “barbie”. That would be wrong. I play for “barby” (plural: “barbies”). Yup. That’s what I do. So my goal on any given hole is to figure out how I can get a barby — one of the many barbies I’ll be playing for during that round.

Playing for Barbies: The Advantages

The top line is the invisible player I’m playing against. (Bogey, or Barby. Take your pick.) The second line is me. The third is the cumulative over/under. If fill in 1 over par for the invisible player. To get their total for the side, I add 9 to the par total. All very easy.

Right off the top, I know I’m playing for 45 a side — not 36. That takes off some of the pressure, and it will make it a lot easier to calculate my score later. (That’s the goal. Make it easier, and have more fun.)

Here’s the score card after finishing the front nine:

On the second hole, I was one under. On the third, I was one over, which brought me back to even. When I finished the side at 2 over, I knew I had scored a 47 for the front 9, and needed two pars on the back nine to break even for the round. (It never happended. One of many reasons why I’m only showing you the front nine!)

Playing for Barbies: The Disadvantages

For most of us, playing for barbies makes a lot of sense. When you’re consistently in negative double-digits (10 or more under barby), then it makes sense to keep score relative to par. Until then, play for barbies. It’s easier to keep score, the game is more fun, and you can dream of future rewards!