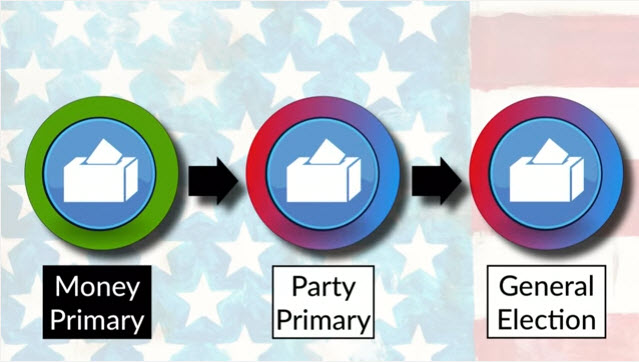 Dr. Lessig brilliantly summarizes the campaign contribution problem: When candidates are chosen by a select few, elected officials respond only to them!

In his short MidAtlantic Tedx Talk, Dr. Lessig’s spends the first 10 minutes giving a brilliant summary of the campaign-contribution problem. The title of the talk is “Our democracy no longer represents the people. Here’s how we fix it.” In this article, I describe his astute insights into the nature of the problem. In the next, I describe the solution he recommends, and explain why the voting advice system is a prerequisite!

Dr. Lessig starts by describing a student protest in Hong Kong, after China proposed a law which said it’s aim was to promote democracy, but which proposed doing so by allowing a select few (members of a nominating committee) to choose the candidates that the rest of the population would vote on!

The students rightly detected the problem with the two-stage election process — the size of the selection committee! The proposed committee would contain 1200 people, or about .02% of Hong Kong’s 7 million people.

Dr. Lessig displays this diagram to show how much of the population .02% really is:

What the students rightly feared is that the committee would be acting as a filter on the candidate-selection process, and that the filter would be biased. They feared that, being comprised of a pro-Beijing business and political elite, .02% of the population would effectively control the political process, which meant that by definition, 99.98% of the population would be excluded from the process.

The problem with a biased filter, of course, is that such a selection process creates a “democracy” that is responsive to China — and to no one else!

Lessig calls the situation the “Boss Tweed Problem”, or “Tweedism”, after the name of the American politician who inspired the Chinese to propose their “solution” to the problem of democracy. Because, as Boss Tweed said,

I don't care who does the ELECTING, as long as I do the NOMINATING. --Boss Tweed Click To Tweet

That system is clearly a problem for a democracy, because candidates will clearly be most concerned about the people doing the nominating.

Dr. Lessig describes it as a “genius theory for destroying democracy”, because “any two-stage process where the Tweeds get to nominate…produces a system that is responsive to the Tweeds — and only to the Tweeds.”

For another example, Lessig points to a time in the history of Texas when only whites were allowed to vote in primaries — which meant that when it came to time for the election, the only candidates anyone could vote on were responsive only to white voters, which disenfranchised the remainder of the voting population (16% of whom were black).

Here’s how I would summarize the problem Dr. Lessig identifies:

A system only PRETENDS to be democratic when a select few choose the candidates. Click To Tweet

In Hong Kong, the select few would have been chosen by China. In America, the select few are the campaign contributors. Either system is effectively a pretense of democracy.

In our system, the ability to get campaign contributions is the first and necessary step in any candidacy. In effect, then, there is an unrecognized selection-stage in our political process — what Dr. Lessig calls the money primary:

As Dr. Lessig points out:

In other words, .02% of the American population choose the candidates everyone else votes on. Click To Tweet

Dr. Lessig calls that a percentage  a Chinese fraction of the population.

As Dr. Lessig puts it at 6:52 in his talk, “That’s not American democracy. That is banana republic democracy!”

Average Americans Have NO Say

They found that to the degree to which wealthy interests (economic elites) and organized special-interest groups favored a piece of election was the degree to which the legislation was likely to be approved. (Lessing displays two graphs that summarize the basis for their conclusion.)

On the other hand, they found that the degree to which average Americans favored a proposal had no impact. Or as Lessig put it, “As the percentage of average voters who support a proposal goes from zero to 100%, it does not change the probability that the proposal will be enacted.”

On the basis of that study, BBC News reported that the U.S. is not a democracy, but is rather “an oligarchy…dominated by a rich and powerful elite.” They cite the conclusion from that study:

Economic elites and organised groups representing business interests have substantial independent impacts on US government policy, while average citizens and mass-based interest groups have little or no independent influence.”

But Lessig may have said it best when he quoted from that study:

When the preferences of economic elites and the stands of organized interest groups are controlled for, the preferences of the average American appear to have only a minuscule, near-zero, statistically non-significant impact upon public policy.

So the problem with a system that depends on campaign contributions is that the Big-$$ contributors are a small subset of the population — the select few who choose the candidates that the rest of the population votes on. And the nature of such systems is, naturally, that elected officials are solely responsive to those few!